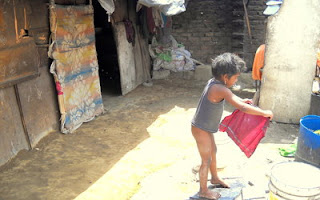 UNICEF’s long standing support for improving water supply, sanitation and hygiene stems from a firm conviction and based on sound evidence that these are central to ensuring the rights of children.
In fact, it is essential for children to survive, grow and develop into healthy and fulfilled citizens of the world. In the broader context, UNICEF’s activities in Water, Sanitation and Hygiene (WASH) contribute to the achievement of the Millennium Development Goals.
Fast Facts
Hand washing with soap, particularly after contact with excreta, can reduce diarrhoeal diseases by over 40 per cent and respiratory infections by 30 per cent.  Diarrhoea and respiratory infections are the number one cause for child deaths in India.
Hand washing with soap is among the most effective and inexpensive ways to prevent diarrhoeal diseases and pneumonia.
With 638 million people defecating in the open and 44 per cent mothers disposing their children’s faeces in the open, there is a very high risk of microbial contamination (bacteria, viruses, amoeba) of water which causes diarrhoea in children.
Children weakened by frequent diarrhoea episodes are more vulnerable to malnutrition and opportunistic infections such as pneumonia. About 48 per cent of children in India are suffering from some degree of malnutrition. Diarrhoea and worm infection are two major health conditions that affect school age children impacting their learning abilities.
Adequate, well-maintained water supply and sanitation facilities in schools encourage children to attend school regularly and help them achieve their educational goals. Inadequate water supply and sanitation in schools are health hazards and affect school attendance, retention and educational performance.
Adolescent girls are especially vulnerable to dropping out, as many are reluctant to continue their schooling because toilet facilities are not private, not safe or simply not available
Women and girls face shame and a loss of personal dignity and safety risk if there is no toilet at home. They have to wait for the night to relieve themselves to avoid being seen by others.
Sanitation
It is estimated that
• Only 31 per cent of India’s population use improved sanitation (2008)
• In rural India 21 per cent use improved sanitation facilities (2008)
• One Hundred Forty Five million people in rural India gained access to improved sanitation between 1990-2008
• Two hundred and Eleven Million people gained access to improved sanitation in whole of India between 1990-2008
• India is home to 638 million people defecating in the open; over 50 per cent of the population.
• In Bangladesh and Brazil, only seven per cent of the population defecate in the open. In China, only four per cent of the population defecate in the open.
Water
• 88 per cent of the population of 1.2 billion has access to drinking water from improved sources in 2008, as compared to 68 per cent in 1990.
• Only a quarter the total population in India has drinking water on their premise.
• Women, who have to collect the drinking water, are vulnerable to a number of unsafe practices. Only 13 per cent of adult males collect water.
• Sixty seven per cent of Indian households do not treat their drinking water, even though it could be chemically or bacterially contaminated.
Hygiene
• According to the Public Health Association, only 53 per cent of the population wash hands with soap after defecation, 38 per cent wash hands with soap before eating and only 30 per cent wash hands with soap before preparing food.
• Only 11 per cent of the Indian rural families dispose child stools safely. 80 per cent children’s stools are left in the open or thrown into the garbage.
• Only 6 per cent of rural children less than five years of age use toilets.
• WASH Interventions significantly reduce diarrhoeal morbidity; statistically it has been shown that:
• Handwashing with soap reduces it by 44 per cent
• Household water treatment by 39 per cent
• Sanitation by 36 per cent
• Water supply by 23 per cent
• Source water treatment by 11 per cent.
Key Issues
• Newborn Infants: Hand washing by birth attendants before delivery has been shown to reduce mortality rates by 19 per cent while a 4 per cent reduction in risk of death was found if mothers washed their hands prior to handling their newborns.

• Older Girls: Giving girls the knowledge and facilities necessary for good menstrual hygiene is key to their dignity, their privacy, their educational achievement and their health. Adolescent girls are empowered through improved menstrual hygiene management.

• Mothers and Caregivers: Hand washing with soap at critical times is important for protecting the health of the whole family. By being a role model, mothers and caregivers can also help instill in their children the good hygiene practices which will serve them for life.

• Children in emergencies: During emergencies, children are especially vulnerable to the effects of inadequate access to water and sanitation services. WASH is a key component of any emergency response.
Chemical contamination in water ensuring water quality at the source is crucial. In India, there is a widespread natural occurrence of arsenic and fluoride in the groundwater. UNICEF is supporting Government of India programs on arsenic and fluoride mitigation and identifying water quality testing technologies which are appropriate for use in field situations.
All emergencies cause disruption to basic services. People are less likely to be able to drink safe water, use basic sanitation facilities and maintain improved hygiene practices. Children, especially those under the age of five, are particularly vulnerable to the diseases which can result during emergencies.
These diseases include diarrhoea, cholera, typhoid, respiratory infections, skin and eye infections which are all likely to occur when water supplies and sanitation services are disrupted. UNICEF has set out minimum standards of response for any emergency situation. These describe the life saving actions which UNICEF will take within the first six to eight weeks of an emergency, along with the longer term role in the subsequent weeks and months.

Popular posts from this blog

Climate Change and Its impacts on Water Sources in India

May 17, 2022
Climate Change and Its impacts on Water Sources in India -Ecenur Dede The climate change is one of the challenging issues that the world faces with.It not only affects the quality of life but also is the essential issue that affect both economic social and political lives of individuals.Therefore,it has to be considered and has to be found some solutions regarding it in order to be able to enhance the lives of human being.In particular,India is the one of the countries that faces the issue of climate change.For instance,the  country reported the highest number of deaths in 2016 was due to the extreme weather.(Lahiry,2018).Therefore ,it is one of the challenging problems that the country has to overcome with.In this article,it will be elaborated how climate change impacted the water sources of India and its impacts on the society. In India,the water is one of the crucial sources that country has to take care of as any other places in the world.The importance of water specifically
Post a Comment
Read more

October 24, 2018
According to the 4 th  goal of the UN Sustainable Development Goals, it is necessary to ensure the whole population the opportunity to attend primary and secondary studies, guaranteeing equal opportunities for both boys and girls to access to quality technical and vocational education.This means that states will have to respond through political interventions to safeguard both quality improvement and above all complete indiscriminate access for every child, through means that address gender inequality, food insecurity and armed conflict. In India, important advances have been made regarding the universalization of primary education, succeeding in obtaining an improvement in enrollment rates and completion by girls in primary and secondary school studies. According to the report of UN system in India, Indian population managed to reach the literacy rate among youth aged 15-24, from 83.2% to 91.4%,between 1990 and 2016. Completion rates in primary school were 89.6% by 2016. What
1 comment
Read more

No Menstrual Hygiene For Indian Women Holds Economy Back

July 29, 2013
Sushma Devi, a mother of three in Northern  India , stores her “moon cup” on the window sill of the mud-brick veranda that shelters the family goats. In a village where few have indoor toilets and the Hindi word for her genitals is a profanity, 30-year-old Sushma struggles to talk about how she manages her period and the changes brought by the bell-shaped device she inserts in her vagina to collect menstrual blood. Enlarge image Cloth sanitary napkins are shown to village women in Rupaspur, around 60 kms from Agra. Many Indian women make do with little more than scraps of old cloth when menstruating, often risking their health, say aid workers trying to make clean and cheap sanitary napkins available. Photographer: Manan Vatsyayana/AFP via Getty Images Enlarge image Sustainable Health Enterprises (SHE), with technical assistance from North Carolina State University and Massachusetts Institute of Technology, has designed the SHE LaunchPad, a menstrual pad that utili
Post a Comment
Read more