Photo: World Bank/Allison Kwesell
30 October 2013 – Member States must ensure that the post-2015 development agenda addresses inequalities that prevent millions of people from getting access to basic services, various United Nations entities today stressed.
In a joint statement, the UN Children’s Fund (UNICEF), UN Office of the High Commissioner for Human Rights (OHCHR), Friends of Water, and the Special Rapporteur on the human right to safe drinking water and sanitation, urged countries to frame the new development agenda around the principles of equality and non-discrimination.
The statement was issued ahead of a panel discussion at Headquarters on “Measuring inequalities in the Post-2015 development agenda: a new global tool for Water, Sanitation and Hygiene for All (WASH) and beyond,” co-organized by the Permanent Mission of Finland and the Office of the Special Rapporteur.
“I today join those who are calling for the post-2015 development agenda to address inequality. We need to dismantle the multiple and systematic barriers that marginalize the most vulnerable members of society so that we can achieve a life of dignity for all,” said the Deputy Secretary-General, Jan Eliasson.
The statement emphasizes that future goals, targets and indicators should include an explicit focus on the most marginalized and disadvantaged groups and individuals, including through the use of disaggregated data, which will allow inequalities to be measured.
“Success” should be assessed in relation to the progress made in closing gaps or inequalities in access to sanitation, water and hygiene, and other sectors such as access to education and immunization.
“We will work to ensure that development priorities, in the coming years and beyond, focus on the millions of marginalized peoples who have remained hidden within aggregate statistics, and who continue to have no access to basic services,” the statement read.
It added that this was one of the most important lessons learned under the Millennium Development Goals (MDGs) framework, which put forward eight anti-poverty targets on poverty alleviation, education, gender equality, child and maternal health, environmental stability, HIV/AIDS reduction, and a global partnership for development.
“We all know that the framework of the MDGs has produced many important gains for people around the world. But we are also aware that these improvements are generally measured [at the global, regional or national level] and do not adequately assess how the most vulnerable and marginalized are affected,” Mr. Eliasson said.
He noted that while the MDG target for providing access to improved water sources has been reached, there are still 768 million people who do not have access to safe drinking water. In addition, 1 billion people still practice open defecation for lack of decent toilets.
“Not only do the poor lack access to clean water, they also frequently pay more for the limited access they have,” he said. “Across the developing world, people living in slums can be paying up to ten times more for their water than the residents of cities like New York or London.”
He added that he would continue leading the global Call to Action to accelerate work towards the MDG on sanitation and to eliminate the practice of open defecation by 2025, which aims to ensure that everyone, everywhere, has access to adequate sanitation.
Source:http://www.un.org/apps/news/story.asp?NewsID=46377#.Us5LjdIW3wg
Posted by Heeals at 12:58 No comments: 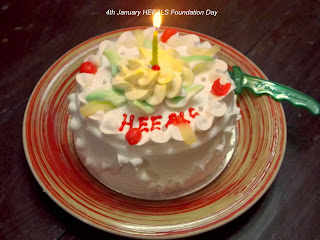 Heeals Is An Acronym Denoting Our Commitment To Committing Human And Technical Resource To Achieve Health Education Environment and Livelihood Society for all.
The Mission,Vision,Goals &Objective of Heeals Was Shaped Through A Strategic Planning Process In 2010. Heeals Originally Conceived As An Bridge To Meet The Network Of Information &Communication, Capacity Building, Networking And Sharing Needs Of People And Organization That Are Keen To Undertake Sustainable And Community Development Initiative.
Heeals Was Built By A Core Team Of Committed Executive Committee, The Member And Staff Member, Who Collectively Have Extensive Experience In Rural, Urban And Social Development In India.

We Give Thanks To Our Team Member ,Partner ,Volunteer And All Those Who Support Us In Our Cause ,We Give Thanks Everyone Who Tirelessly & Generously Give Their Service To The People In Need . And We Give Thanks For All Those Who Will Come And Join Today ,Tomorrow & In Future Years To Be Good Help To Those In Need.