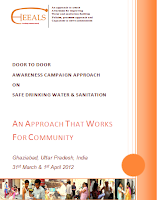 
A Report On Safe Drinking Water & Sanitation
Posted by Heeals at 15:05 No comments:

Today India looking a permanent membership of UN, he is already a prominent member of international organisations like SAARC and BRICS.
Many big MNC’s had already made their homes in India and many are in the process to do so , India is also achieving great heights in industries and defence sector .
By looking at these developments we can say that indeed India is progressing at a very fast pace! But to an extent it is a artificial or illusion. Still India is thousand years behind if we compare it with the developments of western countries , A country which is still in 21st century is bound in the shackles of Caste & Religious atrocities , Honour killing , Manual Scavenging  etc from thousands of years ,then how can we say that this country is developing in a true sense .
“We have to end the biggest Dehumanising Activity called Manual Scavenging”
The Employment of Manual Scavengers and Construction of Dry Latrine Prohibition Act in 1993 was indeed to give some relief from this activity, but still nothing has done to eradicate this practice. Tens of thousands of people are engaged in Manual Scavenging.
There were 118474 Manual Scavengers or their dependents which are identified in under the self employment scheme for the rehabilitation launched in 2007.
One of the difficulties in eliminating this activity is lack of Proper Sanitation Facilities in Rural India and urban slums. There are poor Sanitation Facilities in these places. People are still using dry latrines which encourage Manual Scavenging. We have to stop the dry latrines practices and help them in making Proper Sanitation Facilities.
There are no sewerage facilities in rural areas, Urban Slums are also not touched by proper sewerage facilities .Still workers manually clean the septic tanks, “these septic tanks are becoming death tanks for the workers”.  It is full of many poisonous and dangerous gases, many people are died by inhaling poisonous gases and many of them going to die if we would not stop this Dehumanising Practices.
Many of them are the sole bread winners of their families .These dependents were force by social and economic conditions to come into these practices to feed their families. Most of the Manual Scavengers belongs to SC & ST, last year MHA (Ministry Of Home Affairs) told to all states that engaging or employing a member in SC or ST in manual scavenging fall within the ambit of SC & ST prevention of Atrocities Act, but there is no record of any one being convicted under this Act.

We need to create awareness regarding manual scavenging and bad sanitation facilities among the community to safeguard the rights of people against evil practices of Manual Scavenging. We can eradicate the Manual Scavenging practice by improving the Sanitation Facilities in every part of India.

Happy May Day to all of you ,lets take a pledge to eradicate Child labour and Manual scavenging from our society , Say " No to Child Labour and Manual Scavenging "
Posted by Heeals at 11:38 No comments: