Indians have better access to banks than toilets. Badagaon Jagir is a village of 300 households in Gwalior district. Thanks to the ultra-small branch of the Central Bank, opened under Madhya Pradesh’s financial inclusion model, the village boasts of complete banking coverage with over
1,200 accounts.

When it comes to toilets, however, the picture isn’t quite as flowery. About half of Badagaon Jagir’s population still goes to the fields when nature calls.
This story of this village, however, is not unique. Though the country has made impressive strides in effecting financial inclusion of the poor, basic sanitation is something it is struggling hard to achieve.

As much as 59% of Indian households avail banking services, the latest compilation of India in Figures-2012 shows. In comparison, only 47% of the households have a latrine, and as much as half lack drainage facilities.
Census 2011, on the other hand, showed that the number of mobile phone connections surpassing toilets by leaps and bounds – standing at 63% of the population.

While the recent comparison of temples and toilets by minister for drinking water and sanitation Jairam Ramesh may have kicked up a storm, policy makers and activists admit that the open defecation issue has received little attention on the planning board.
Therefore, it’s hardly surprising that more Indians (47%) have television sets than water connections at their homes (43.5%).
Noting the average Indian’s fascination with television and the cinema, the ministry roped in actress Vidya Balan to play the role of ambassador for a tabooed subject — toilets and sanitation.
Last week, Ramesh launched a 2000-KM Nirmal Bharat Yatra passing through five states that fare poorly in matters relating to sanitation – Maharashtra, Madhya Pradesh, Rajasthan, Uttar Pradesh and Bihar.
There were 28,000 nirmal grams – open defecation-free village panchayats – till 2011-end, compared to over 2.4 lakh panchayats in the country.

Link to the source:- http://www.hindustantimes.com/India-news/NewDelhi/Banks-aplenty-toilets-few/Article1-944627.aspx

Instead Of Open Defecation, Toilets Are Their Birth Right.”

Imagine when someone asked about your profession , what is your profession  You said ; I work to promote Toilets .It  is not easy to say, When most of the activity are working on land right ,child right housing right and equal wages right .How many of us proudly said that We are working for Toilet use. In India we give priorities to everything except toilet.

“Instead of open defecation, Toilets are their Birth Right.” 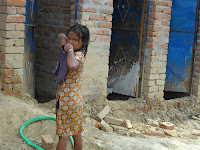 To retain a bit of privacy & Diginty, a large part of rural India and urban poor women wake up pre dawn In search of quit place for nature’s call.
They defecate near the water bodies from where they get water for drinking, bathing other purpose. Which is very dangerous to their body?
Many of them developed gastro intestinal and constipation problem. Toilet's are Hygiene issue,sanitation issue, health issue, a privacy& dignity issue .

‘No Toilet, No Bride’

Days after he kicked up a row by stating that there were more temples than toilets in the country, Union Minister Jairam Ramesh on Sunday urged women not to get married into families that do not have toilets in their homes.
“Don’t get married in a house where there is no toilet,” the Rural Development and Water and Sanitation Minister said while addressing people of Khajuri village near Kota. 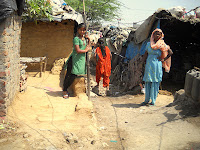 “You consult astrologers about rahu–ketu before getting married. You should also look whether there is a toilet at your groom’s home before you decide to get married,” he said.
Later, Mr. Ramesh launched the third edition of the Nirmal Bharat Yatra at Sangod in Kota district.


Urban area face ordeals ranging from disease to sexual harassment because of little or no access to toilets ,a large slums population has no access to toilets and lack of adequate sanitation facilities for more than 50 million of people who defecate in open everyday , rural and urban areas facing acute shortage of toilets and clean drinking water . due to lack of sanitation facilities there is rise in girls drop out of school .many children under five years of age are affected by  diarrhoea and which caused by lack of sanitation . There is urgent need from philanthropist and government and non-government agencies to must invest in safe drinking water and sanitation facilities . For every $1 spent on sanitation at least $9 is saved in health ,education and economic development ,Tackling the problem of inadequate sanitation not only require building infrastructure but creating awareness of the issue .For holistic development of the society we must invest in safe drinking water and sanitation facilities .
India is home to 638 million people defecating in the open. People have Everything in their Home From TV set to Mobile Phones, But they don’t have Toilet Facilities ! .
About 49.8% of household have no toilet facilities and defecate in the open
World bank study estimated that economic impact of the lack of toilet and sanitation facilities which it pegged at a staggering Rs 24 thousand crore Annually or 6.4 % India’s GDP,this loss is created by deaths especially of children ,the Cost of treating hygiene related illness & loses from reduced productivity .
Open Defecation is an ugly reminder of the country’s poverty and the failure of the Government to provide adequate  Safe water & sanitation facilities .

Email ThisBlogThis!Share to TwitterShare to FacebookShare to Pinterest
Labels: heeals volunteer india, investment in sanitation is investment in development, sexual harassment due to no access to toilet ., volunteer in india ngo
Newer Posts Older Posts Home
Subscribe to: Posts (Atom)