Raising a stink about global sanitation 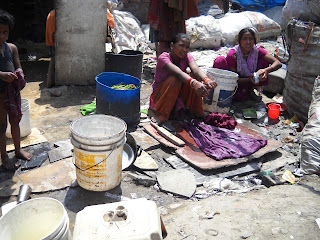 Imagine having no choice but to relieve yourself out in the open, in front of anyone who’s there? That’s the reality for millions of poor girls in India. HEEALS is a charity that’s working to end that lack of the basic right to sanitation. It’s changing lives. Girls who’d had no chance in life now have a future.

The effects of not having adequate toilet facilities on girls are terrible.
They have no choice but to perform this vital function publicly.

Blackboard: Dalit Women Walking Several Miles Just To Fetch Wa...: Kalayat in Haryana in Kaithal district is dominated by the Rajputs with Dalits with particularly sansis constituting 25% for the villag...
Posted by Heeals at 12:09 No comments:

Women in Bettiah, Bihar, India learn how to make, fold and clean sanitary napkins from used cloth on Nov. 18, 2012. WSSCC/David Trouba
By Julie Mollins
LONDON (AlertNet) – More than 300 million women and girls in India do not have access to safe menstrual hygiene products, endangering their health, curtailing their education and putting their livelihoods at risk, say experts at the Geneva-based Water Supply & Sanitation Collaborative Council (WSSCC).

At least 23 percent of girls in India leave school when they start menstruating and the rest miss an average of five days during each monthly menstrual period between the ages of 12 and 18, according to WSSCC, a partnership run by government, non-governmental organisation (NGO) members and a United  Nations-hosted secretariat.

“From a taboo standpoint they are ostracised – it’s an awkward situation to be in if you are having your monthly period and you simply do not want to be seen by others because they may perceive you as either dirty or unhygienic in some way,” said Chris Williams, executive director of WSSCC.

Many women and girls in India are forced to use such materials as old rags, husks, dried leaves, grass, ash, sand or newspapers every month because they lack access to essential sanitary products, according to WSSCC, which works to achieve sustainable water supply, sanitation and hygiene worldwide.

Taboos about menstruation are compounded by a lack of proper sanitation in India where only 34 percent of people have access to improved sanitation facilities, which ensure the hygienic separation of human excreta from human contact, according to 2012 statistics from the World Health Organisation (WHO) and the U.N. children’s agency, UNICEF.

The taboo is related to a very complex web of issues, but the starting point is an extremely patriarchal, hierarchical society responsible for the silence around menstruation, said Archana Patkar, a programme manager with WSSCC.

“It’s quite strange because menstruation and a menstruating woman are stigmatised, and then a woman becomes pregnant due to the menstrual cycle – without which it’s not possible to bear a child – and it’s a celebration,” Patkar told AlertNet, adding that the first step to reversing the taboo is to break the silence.

“If we can actually have a single celebration from puberty to motherhood and therefore this issue becomes an issue of pride rather than shame, then all the psychological burden and the trauma associated with the silence slowly starts being chipped at and will in time die away,” Patkar said.
AWARENESS CAMPAIGN

India loses about $53.8 billion each year due to increased health costs, productivity losses, and reduced tourism revenue due to inadequate sanitation and poor hygiene, said WSSCC citing the Water and Sanitation Programme.

In 2012, as part of its public education campaign, WSSCC helped organise a Yatra, or roving carnival, in India across five different states to raise awareness about menstrual hygiene management. Around 200,000 people participated in the carnival.
During the carnival, WSSCC interviewed 775 women and girls and held focus groups with some 12,000 women and girls.
“It was amazing to discover that 90 percent didn’t know what a menstrual period was before they had their first one. They described to us the fear associated with it – they didn’t know what was happening.”

The problem is big in any poor area – urban or rural – in any area where people are so poor they cannot cope with daily survival demands, Patkar said, adding that WSSCC plans to adapt public education programmes to suit different menstruation-related taboos in other parts of the world.

WSSCC successfully lobbied to have menstrual hygiene management recognised as part of the future 2015 Sustainable Development Goal (SDG) targets on water, sanitation and hygiene at a high-level meeting in The Hague in 2012, Williams said, adding that it’s unlikely to be a goal in itself.

“More important than goals, I hope it would be an indicator of improved sanitation because in that way international development organisations, governments and NGOs would all be seeking to achieve sanitation by demonstrating that they’ve improved menstrual hygiene management.”

As the most powerful cross-cutting indicator influencing gender, it should also be included as a measurable indicator of progress on education, health and workplace development goals, Patkar said.

Policymakers are in the process of mapping out SDGs to replace the Millennium Development Goals (MDGs) – eight anti-poverty targets agreed in 2000 by U.N. member states. At least 2.5 billion people worldwide do not have proper sanitation facilities.

A meeting at U.N. headquarters in Geneva on International Women’s Day hosted by WSSCC will examine how international conventions on women’s sexual and reproductive rights do not explicitly address menstruation, although the taboos around it plague a third of the world’s population. Topics to be covered at the March 8 event include menstrual hygiene management in education, health and the workplace.

“Beginning the conversation is the first step,” Williams said. “Once that conversation is generated it lends itself to a wider discussion about improving sanitation and hygiene generally and then dealing with safe waste management.”

The Role of Sanitation in Girl Child Education - A Documentary Film


Please Click on the following link to Watch Documentary Film :-

Heeals is a Non Profit Organisation registered under the Indian Government societies act 21 of 1860
A vibrant civil society organization aims to safeguard health, environment, education and livelihood to promote sustainable development of society.
Through The Medium of Documentary Film and Art we are trying to create Awareness Among the Masses about Girl Child Education , Menstrual Hygiene, Sanitation and Safe Drinking Water and trying to relate how Girl Child education is directly suffering due to bad sanitation facilities , unsafe drinking water and lack of knowledge to obtain the same.
For suggestions , feedback related to the documentary please contact us at communications@heeals.org
To support our work and help us in our efforts Visit us at:- http://heeals.org
Blog:- http://heeals.blogspot.in/
Volunteer Blog :- http://volunteerheeals.blogspot.in/