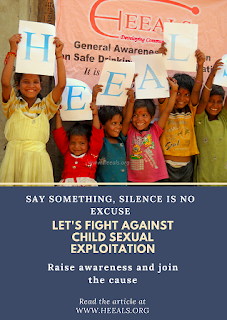 In simple terms, Sexual exploitation is an act or acts committed through non-consensual abuse or exploitation of another person’s sexuality for the purpose of sexual gratification, financial gain, personal benefit or advantage, or any other non-legitimate purpose.
The act or acts of sexual exploitation are STRICTLY PROHIBITED by law.
WHAT  DOES CHILD  EXPLOITATION  LOOK  LIKE?
Child sexual exploitation is a type of sexual abuse. When a child or young person is exploited they're given things, like gifts, drugs, money, status and affection, in exchange for performing sexual activities. Children and young people are often tricked into believing they're in a loving and consensual relationship. This is called grooming. They may trust their abuser and not understand that they're being abused.
Children and young people can be trafficked to be sexually exploited. Sometimes abusers use violence and intimidation to frighten or force a child or young person, making them feel as if they've no choice. Anybody can be a perpetrator of exploitation, no matter their age, gender or race. Children and young people who are exploited may also be used to 'find' or coerce others to join groups.
SIGNS OF CHILD SEXUAL EXPLOITATION
IF A CHILD REPORTS ABUSE
If a child talks to you about sexual exploitation it's important to:

Both sexual exploitation in person and online can have long-term effects on a child or young person. They may:

REPORTING SEXUAL ABUSE
Increased attention in the activism around child protection led to the Government of India passing the ‘The Protection of Children from Sexual Offences (POCSO)’ law in 2012. This act criminalizes a range of acts including rape, harassment, and exploitation for pornography involving a child below 18 years of age and mandates the setting up of Special Courts to expedite trials of these offences. A complaint can be filed under this act and immediate action will be taken.
PREVENTING CHILD SEXUAL EXPLOITATION
Following are some steps that can be taken to spread awareness among children regarding sexual exploitation:
1.      Teach children and young people about healthy relationships and how to stay safe online can help prevent sexual exploitation. These foundations can be laid from a young age.
2.      Make sure children and young people know there are trusted adults they can speak to about their worries.
3.       Helping children to understand their bodies and sex in a way that is appropriate for their age
4.      Developing an open and trusting relationship, so they feel they can talk to you about anything
5.      Explaining the difference between safe secrets (such as a surprise party) and unsafe secrets (things that make them unhappy or uncomfortable)
6.      Teaching children to respect family boundaries, such as privacy in sleeping, dressing and bathing
7.      Teaching them self-respect and how to say no
8.      Supervising internet, mobile and television use