Why do millions of Indians defecate in the open?

It's early morning and local commuters are queuing up for tickets at the Kirti Nagar railway station in the Indian capital, Delhi.
Along the tracks, another crowd is gathering - each person on his own, separated by a modest distance. They are among the 48% of Indians who do not have access to proper sanitation.
Coming from a slum close-by, they squat among the few trees and bushes along the railway tracks and defecate in the open.
To many, this is a daily morning ritual despite the hazards of contracting diseases such as diarrhoea and hepatitis.
It can be even more hazardous for women since each time a woman uses the outdoors to relieve herself, she faces a danger of sexual assault.
Recently two teenage girls from the state of Uttar Pradesh were gang-raped and found hanging from a tree after they left their village home to go to the toilet. Their house, like hundreds of millions of others in the country, did not have any facilities.
'No privacy'
A new World Health Organisation (WHO) report says more than half a billion people in India still "continue to defecate in gutters, behind bushes or in open water bodies, with no dignity or privacy".
Access to sanitation is a challenge that India's politicians want to tackle - both the Congress and the Bharatiya Janata Party (BJP) promised to put an end to open defecation in their 2014 general election manifestos.
During his campaign, Narendra Modi, BJP's newly-elected prime minister, promised: "Toilets first, temples later".
And former rural development minister Jairam Ramesh of the Congress party had stressed that "practicing good hygiene is as important as performing good puja" (act of worship in Hinduism). 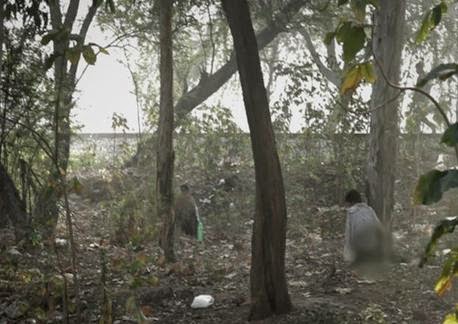 India's government offers cash incentives to subsidise construction of toilets. It has also initiated hygiene and sanitation awareness campaigns, such as the "No Toilet, No Bride" slogan launched in the state of Haryana in 2005, urging brides to reject a groom if he did not have a lavatory at home.
The Gates Foundation too has offered grants to create latrines that are not connected to water, sewer or electricity and to improve the treatment of human waste.
'Lack of focus'
The exhibits at a recent "toilet fair" organised by the Foundation in Delhi included a lavatory with a photovoltaic roof-top that powers a reactor breaking down excrements into fertiliser, and another one which came equipped with an automatic sterilisation system and a generator turning the moisture into water.
Apart from poverty and lack of lavatories, one of the reasons often cited to explain open defecation in India is the ingrained cultural norm making the practice socially accepted in some parts of the society.
"Just building toilets is not going to solve the problem, because open defecation is a practice acquired from the time you learn how to walk. When you grow up in an environment where everyone does it, even if later in life you have access to proper sanitation, you will revert back to it," says Sue Coates, chief of Wash (water, sanitation and hygiene) at Unicef.
India will be free of open defecation only when "every Indian household, every village, every part of Indian society will accept the need to use toilets and commit to do so", she says.
Professor at the Centre for Environmental Planning and Technology Meera Mehta says the strategies implemented so far may not have the expected impact because of a "lack of focus".
"With the right policies and political attention, India can be free from open defecation within 10 years.
Source : BBC News
Posted by Heeals at 12:27 No comments:

Email ThisBlogThis!Share to TwitterShare to FacebookShare to Pinterest
Labels: #millionsofindians#opendefection#toilets#hygiene#sanitation#railwaystation#health#environment#heealsindia 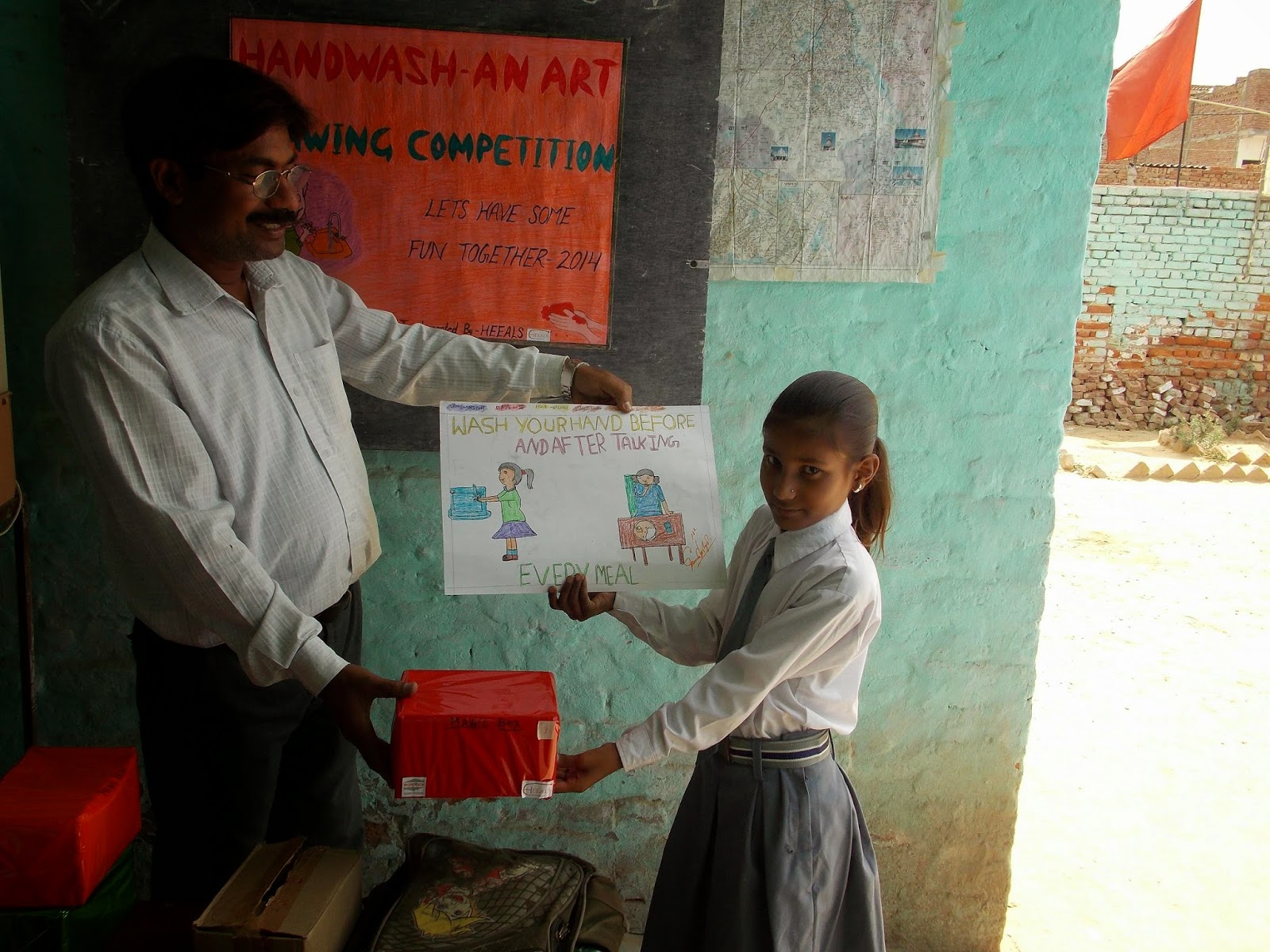 To make Hand wash with soap fun loving and friendly among children. we are continuously  creating and adopting innovative WASH Exercise such as games ,drama ,live shows ,drawing & painting competition etc.
We initiated “Drawing Competition” in 10 schools near National Capital Region .Creating awareness regarding hand wash with soap and adopt good hygiene practice. To bring a good behavior change among the children, the theme of the competition is “HAND WASH IS AN ART”.
Campaign supported by : Soap Box

India has one of the longest coastline in the world ,which is adversely affecting by the increasing sea level. One meter rise in the average sea level in India is likely to affect 7 Million people. 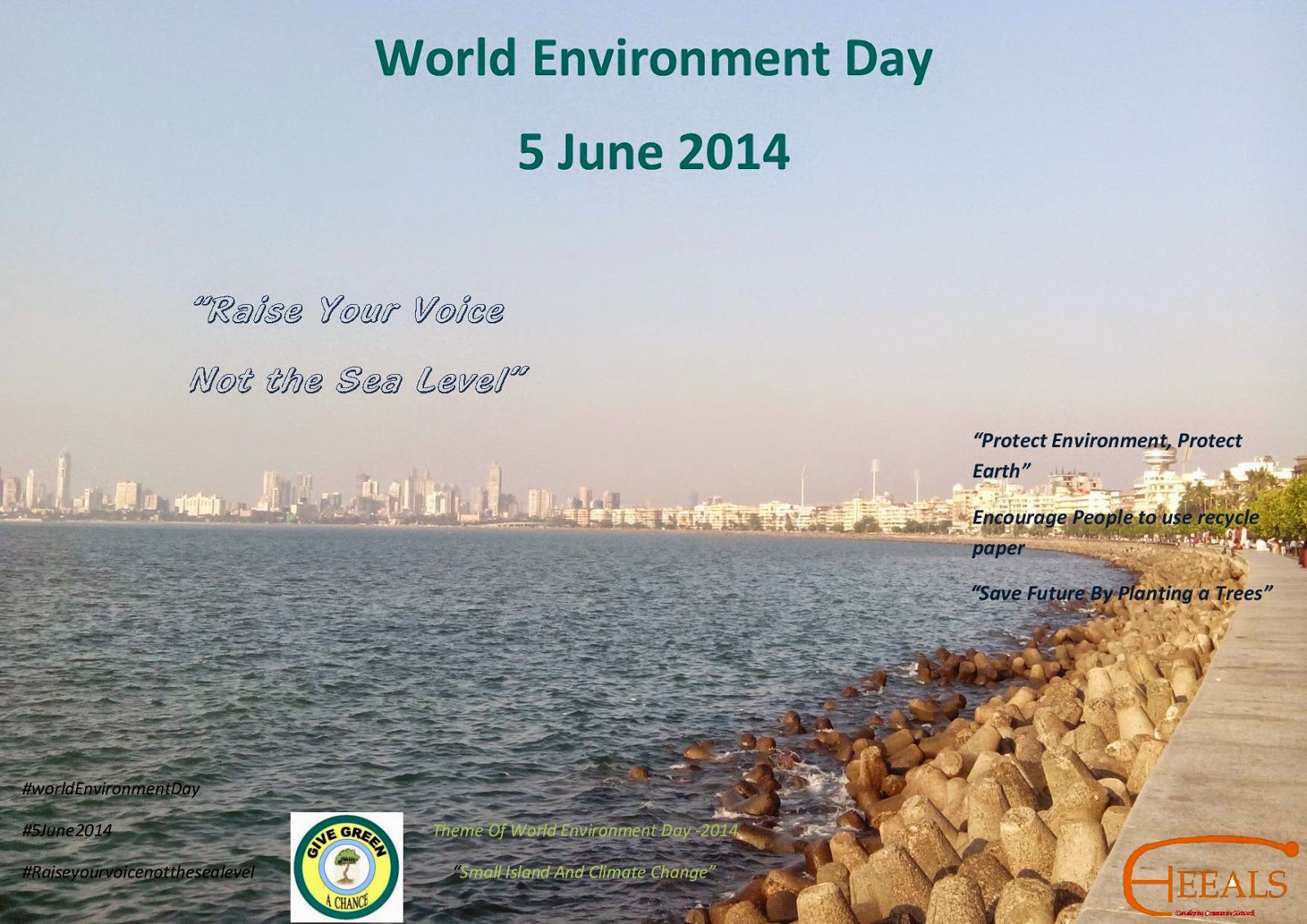 GENEVA: One billion people worldwide still practise "open defecation" and they need to be told that this leads to the spread of fatal diseases, UN experts said on Thursday at the launch of a study on drinking water and sanitation.

"'Excreta', 'faeces', 'poo', I could even say 'shit' maybe, this is the root cause of so many diseases," said Bruce Gordon, acting coordinator for sanitation and health at the World Health Organization. Societies that practice open defecation - putting them at risk from cholera, diarrhoea, dysentry, hepatitis A and typhoid - tend to have large income disparities and the world's highest numbers of deaths of children under 5 years old. Attempts to improve sanitation among the poorest have long focused on building latrines, but the United Nations says that money literally went down the toilet. Attitudes, not infrastructure, need to change, it said. "In all honesty the results have been abysmal," said Rolf Luyendijk, a statistician at the UN's children's fund Unicef. "There are so many latrines that have been abandoned, or were not used, or got used as storage sheds. We may think it's a good idea but if people are not convinced that it's a good idea to use a latrine, they have an extra room." Many countries have made great progress in tackling open defecation, with Vietnam and Bangladesh - where more than one in three people relieved themselves in the open in 1990 - virtually stamping out the practice entirely by 2012. The global number has fallen from 1.3 billion in 1990. But one billion people - 90 per cent of them living in rural areas - "continue to defecate in gutters, behind bushes or in open water bodies, with no dignity or privacy", the UN study said. The practice is still increasing in 26 countries in sub-Saharan Africa. Nigeria was the worst offender, with 39 million open defecators in 2012 compared to 23 million in 1990. India no.1 Although the prevalence of open defecation is in decline, it is often common in fast-growing populations, so the total number of people doing it is not falling so fast, or is even rising. The country with the largest number of public defecators is India, which has 600 million. India's relatively "hands off" approach has long been at odds with the more successful strategy of neighbouring Bangladesh, which has put a big focus on fighting water-borne diseases since the 1970s, Luyendijk said. "The Indian government did provide tremendous amounts, billions of dollars, for sanitation for the poorest," he said. "But this was disbursed from the central level to the provinces and then all the provinces had their own mechanisms of implementing. And as their own data showed, those billions of dollars did not reach the poorest," added Luyendijk. India's government has now woken up to the need to change attitudes, he said, with a "Take the poo to the loo" campaign that aims to make open defecation unacceptable, helped by a catchy Youtube video. here "What is shocking in India is this picture of someone practising open defecation and in the other hand having a mobile phone," said Maria Neira, director of Public Health at the WHO. Making the practice unacceptable has worked in more than 80 countries, the UN says. The goal is to eliminate the practice entirely by 2025. Poverty is no excuse, the study said, noting the role of cultural differences. In the Democratic Republic of Congo, 14 per cent of the population are open defecators. But where the head of the household is an Animist, the figure is twice as high, at 30 per cent. Among households headed by Jehovah's Witnesses, it is only 9 per cent.

Source : The Times of India
Posted by Heeals at 11:14 No comments: