Behaviour Change Towards Sanitation and Education Through Art & Drama

India is the open defecation capital of the world, where people  have more mobile phones then toilets, having easy access to banks as compared to toilets . Open defecation is a big concern and a big issue to be addressed which still is not that touched upon  subject among the community. As people here do not wants to talk about this issue. People in many part of the villages here make there homes without the toilets as they don’t see any use of it even if they have money to build it , instead of this they go out and defecate in the open , without knowing the ill effects and consequences of it on their health and environment. With the main objective of creating awareness among the community about the importance of education, open defecation and clean water, HEEALS, a non-profit organization, has collaborated with  students from the Central School of Speech and Drama (CSSD), University Of London, to use Applied Theatre as an unconventional and proactive tool to increase awareness among school children in villages and urban slums in Gurgaon and the Delhi NCR region. The CSSD students, ,managed to successfully implement the effectiveness of using dramatization to communicate important messages across in a fun, imaginative and expressive way to develop the students’ understandings on the subject matter. The potency of applied theatre was reflected in that its method was inclusive and its purpose went beyond language barriers. 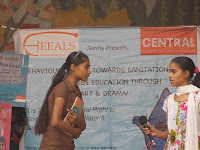 The Drama Campaign lasted for Nine weeks in different schools in and around Delhi and NCR Region culminating the Drama series in Kaushambi Convent School Bhowapur Village (Ghaziabad) on 23rd of November 2012  and with a drawing competition with the theme of Clean City with Clean Drinking Water on 30th November 2012  .In each school, children participated in hour-long drama sessions which resulted in an interactive play being performed in front of children’s parents, school, staff and children. The plays were performed on the topics on ‘Motivational Play to Decrease School Drop-outs’, ‘Girl Child Education’, ‘Hygiene Practices’, ‘Toilet Use, Stop Open Defecation and  Encouraging Girl Toilets ‘and ‘The Importance of Water Conservation’. 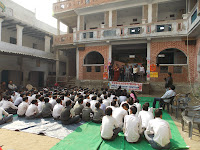 Through drama conventions such as tableaux (freeze-frames) and role-play, the children were able to better grasp the ideas of the topics through emotionally investigating elements of the subject areas. Pictures and keywords were used as stimuli to trigger knowledge, thought and action in the children, where they could then share their opinions, and work together in creating the final story for the piece. In encouraging girl child education and role of sanitation, all the girls were able to come up with a script that described why education and sanitation was important to them. In addition, the children were also equipped with per formative skills such as improvisation, characterization and voice projection.
Using applied theatre has not only helped to raise awareness on the different topics but has also proven to be an excellent platform to show the effectiveness of using drama as a medium to capture what the children really felt towards the topics, and what they have learnt from it. The Drama Campaign has also incorporated other interactive forms to educate children about Sanitation issues such as poster-making and class-decoration competitions with the theme of ‘Sanitation and Drinking Water’ to garner the interests of all the children from the school.
In using art and applied theatre, HEEALS has managed to innovatively and productively inform, impart and educate children from the schools.